Getting back into running has been challenging. I was doing well for about a month before I went in to have a sleep study. I was so focused. I was running stairs in my house every night to make sure I hit at least 10k steps every single day. I did a Fitbit challenge group with my friends that I usually won. My running partner kicked my ass, even though most of it was virtually since our schedules didn’t always match up.

And then my sleep study…

I’ve had issues sleeping since I could remember. Back in high school, I could run on 3-4 hours of sleep. The thing is, back then, I would get 3-4 hours consecutively. Now… Not so much. It goes something like this:

Bed at 10pm
Restless until1045pm
Up at midnight. So restless I get up, walk around my house, avoid looking at my phone since the bright light shocks me from half awake to wide awake.
Back to bed at 100.
Wake up at 130.

…..I think you get the point. I wake up at 530am for the day. I cannot tell you the last time I felt rested. I would get a total of maybe 3-4 hours of sleep, but without it being consecutive, I started becoming more tired and hazy than I ever thought was possible.

After my many many restless nights, and many years later, I finally caved and went to do a sleep study. This has been on my bucket list for years, so I finally just caved and booked an appointment.

Diagnosis will take a while to fully find out. But here’s where I’m at: I have Restless Leg Syndrome. And possibly an acute form of insomnia. (Honestly, neither of these I’m shocked by.) Here’s the tricky part we need to figure out: RLS is caused often (not always) by anemia. I’ve been border-line anemic my entire life. I donated plasma in college (because beer money…). My iron count was hit and miss for donating, but I’d say I was fine to donate 75% of the time. Donating blood though? That’s another story. I had never been able to.

In June, I made a diet change which incorporated some OTC iron pills and mostly spinach salads for lunch. I donated blood through work for the first time that month. So my RLS couldn’t be because of that then right? Well it still could be …

For two weeks, my doctor gave me some guidelines to follow and keep a sleep log. No strenuous exercise after 6, no alcohol at all and no caffeine after noon. The alcohol and caffiene rule I can handle, but no running for two weeks?? I don’t get home from work until 630pm and running before work was out of the question because of my long commute.

Ugh. Fine. It was only two weeks. She needed a baseline to see if these three things could be affecting me. And then the two weeks after that (which I’m currently doing now) I could do what I wanted. And we will be comparing the two weeks to see if there is a difference.

In the meantime, I had to get a blood test taken so they could do a full synopsis to see if my iron levels are too low. If my iron levels are too low, she will give me slow-releasing iron tablets. Seems like an easy fix right? Except it can take THREE MONTHS to fully tell if RLS is caused by anemia. If I need iron pills and after three months, I’m still having issues, they will do an overnight study. On the flip side, if my iron levels come back normal, then we will do an overnight study right away. At this point, its too hard to tell of my insomniac symptoms are just secondary to RLS or if I have both.

Needless to say, this will be a long journey to figure this out. But I’m ready to face it.

Since I was not able to run for two weeks, every morning before work, I did 30 squats. The second week I increased to 45. I needed to do soooomething.

Monday I went running in my new running shoes (which I ordered the DAY BEFORE my sleep study so I was torchered for two weeks staring at a box of perfect new shoes I couldn’t use). I was determined to run 3 miles. I got a mile in and the sky drastically changed. I thought I was going to get stuck in a bad storm, so I turned around and went home. I finished 1.75 miles in 18:39. My first mile was in 10:07. My best time ever. I was so so proud of myself!! I can’t help but think squats had something to do with this. And those shoes. Amazingly comfortable. My feet don’t even hurt today. 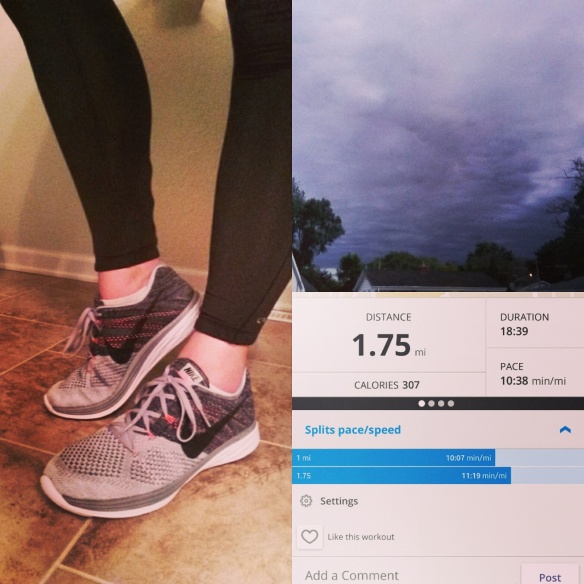 Because I neglected to stretch after my run on Monday, my quads were quite sure yesterday. I did an ab workout, along with a bunch of stretches instead last night, and tonight I’m lacing up those shoes!